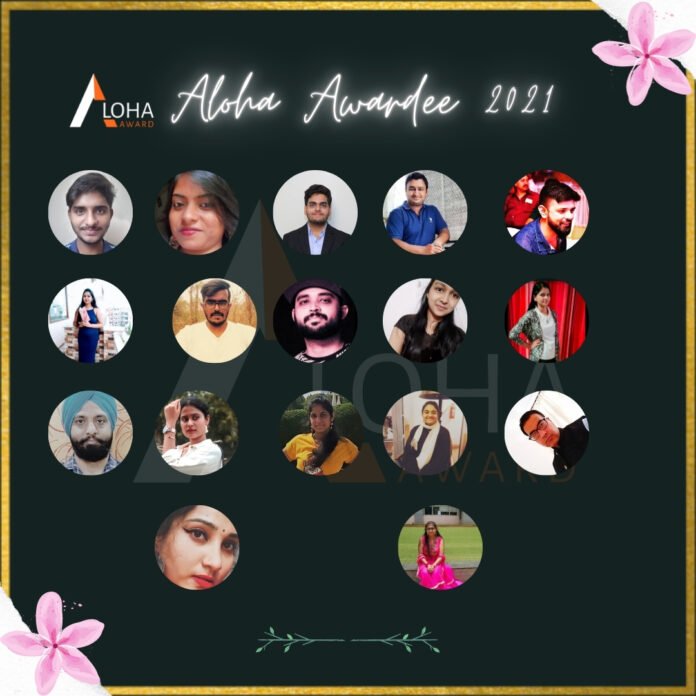 Aloha awards is an online platform of awards having different categories appreciating people with their achievements in each and every fields which fulfills our motto providing wings to the talents.

Aloha awards is unlike other awards as it has a speciality in it…a uniqueness which is filled by our beautiful awardees who have reached to this level undergoing various selection and processes. And here we are celebrating talents.

It got around 20+ nominations across the country nationally and internationally and 5 best talents were recognised and were awarded with a title, trophy, medal and Certificate.

This initiative was started by Aloha Publication dash along with the backbone of Secrets Of Ink Team Samriddhi Khare, Pooja Rathore, Yash Lalwani, Reetisha Rutuparna, Abhisek Pattnaik, Laxmipriya Jena and Somya tyagi with an aim to congratulate and celebrate the talent of all the fields accross places.

We can notice that mostly because of the personalities who are already recognized in some or the other way, the ones whom we don’t catch in the light remain unrecognized.

For the past few decades, there has been an uprise in the raw talent of the youth in all the sector, one of the most peculiar reasons for this is the recognition and platform provided to them at an early stage via reality shows, school level, district level, state-level competition and numerous challenges and many more. It can also be noticed, there is a sudden wave of enthusiasm amongst the elderly, may it be men or women.

Last but not the least, Aloha Awards was formed with a single purpose, to recognise and motivate people so they can do the same for others.Aloha Awards is unlike other awards as it has a specialty in it. A uniqueness which is filled by our beautiful awardees who have reached to this level undergoing various selection and processes. And here we are celebrating talents.

Here are our Talented 19 awardees

We congratulate them whole heartedly on this beautiful achievement and hope that they flourish like this more and more reach to heights and shine someday. We wish luck for their future endeavours.

presswire
Previous articleFardin Ahmed Shovon on the Power of Mindfulness in His Career
Next articleEngjiz Branded Dropshipping Course – Review Best Dropshipping course in 2021?

Jabir Ahmed - 20 October 2021 0
Mohammad Parvez Faruque is a famous musical artist of Bangladesh. He was born on 17 September 1987. His father's name is Md Omar Faruque...

Yash Jadhav – Boy who is earning 5 Figure per month...