We all know that coming from a middle class family is no less than a challenge. But there is this one guy from Vadodara, Gujarat who aced this challenge with flying colours. We are talking about Harsh Gandhi ,an Instagram influencer who has managed to amaze people with his skills. People know him as Shivay and he is basically known by the people for his amazing work. This seventeen years old boy is now a renowned Digital entrepreneur and Marketing Influencer. Today his Instagram page is followed by 1.7 million people which only shows that people love his work. He started working on Instagram in the year 2016 and today he is one of the leading influencer we have. He started working on it after his first break-up. Instead of sulking over his break-up, he decided to do something positive and that’s when he started making memes. After some time he started his first meme page and he gained a very good amount of followers for that page. This encouraged him and he continued working hard. Harsh is the kind of person who puts his heart and soul in his work and that is the reason of his success. He worked for more than two years to gain more than one million fan base on Instagram.

We believe that Harsh determination helps him to conquer all odds. He failed his tenth board exams and it wasn’t easy for him to go through this situation. It gets quite difficult to survive in an environment where people judge your skills on the basis of your marks. It gets difficult to prove your worth in a society where people put  faith on the numbers of your report card instead of believing you. Harsh had to go through all of this. He never imagined that there will be a day in his life when he will be able to earn a five digit number. He believed in himself and he chose to overcome his academic failure. Today he is at the peak of his success because he chose not to give up. He knew that “God helps those who help themselves” and that’s what he did. He helped himself to achieve whatever he has today. He is an eleventh class student who has also served our nation by working in Indian Army. Coming from a family where his father is a jewellery shop owner his journey wasn’t a cakewalk but his dedication helped him to be where he is today. His journey shows that if you truly believe in yourself and if you really want to achieve your goals then nothing is going to stop you. He dreams to be an entrepreneur and a businessman and we all know that he will make his dream come true.

Maxtern Web Teamhttps://maxternmedia.com/
As an organization, we exist to empower the new generation of thought leaders, developers, creators, digital marketers and entrepreneurs, to learn new skills, grow their careers, chase their passions and create financial freedom for themselves, their families, and their lives, all while living out their true purpose. Our global campuses and pop-up workshops will help to eradicate poverty. We are part of a global movement to increase diversity in tech and grow new economies in underserved communities around the world. We enable millennials to become what they want to become in life by learning new skills and leveraging the power of the digital economy. We are living proof that all you need to succeed in this new economy is WiFi and a dream. [No Maxtern journalist is involved in the creation of this content. Email: contact@maxternmedia.com for Removals]
Previous article
The Art of Turning Dream into Reality By Jay Priyanbhai Patel
Next article
How to Earn Money on Instagram – The Ultimate Guide to make money from instagram by Mohit Churiwal – LATEST METHOD 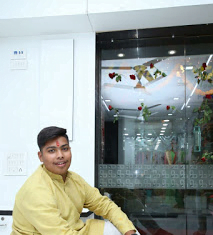 Maxtern Web Team - 10 January 2020 0
At a time when most 18-year-olds are worried about their Standard 12th results and entrance examinations, there is one young man, who is busy...

Rakesh Bhavsar Winning Hearts of Millions being a Musical Artist