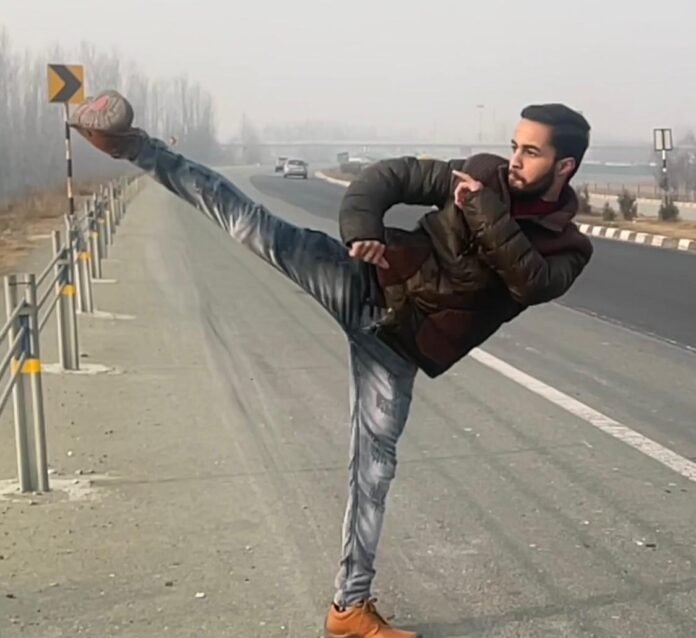 AS SAID BY ERICA JONG, “Everyone has talent. What’s rare is the courage to follow it to the dark places where it leads.” 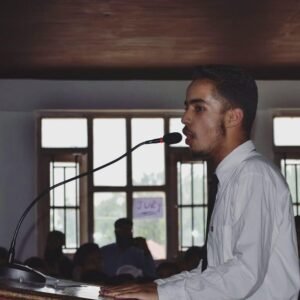 Creative and talented people that can contribute to welfare of country are everywhere, but the opportunity to develop is limited to only a small number of well-off children.

Muneer ahmad tantry is an example of such talent, hailing from an obscure small village KOKERNAG KASHMIR. Muneer has set an example of being industrious and persevering through his talent as MARTIAL ARTIST.

Versatile Muneer has not only done wonders in the field of Martial Art rather his talent has a blend of being a great Orator and a budding Poet too.

While talking to Muneer, he made us realise that It is extremely hard to beat somebody who works and works and never gives up. AS MUNEER SAID, ” People often lose competitions or anything worth fighting for because they give up. When you are matched with someone who never gives up, it is near impossible to beat them”.

The Journey Muneer has is not the bed of roses, it has got thorns and bumps all along. No overnight success made him such great MARTIAL ARTIST. He never sat around wishing that things were easier rather he wished that he was better so that he can achieve what he wants to achieve.

MUNEER journey started with a wish and then came a ride of extreme hard work which made him better with every passing days. He has gone through set backs of failures, brooding through the taunts and words from people etc.

Muneer started his Martial Art Training when he was in 2nd Standard. The training carved out the settled talent of Muneer in his bones. Talking about his journey MUNEER said, “There were many stereotypical things which always made me distressful and weighed me down, sometimes It was difficult for me to manage my studies as well as his Martail Art Training and so on.. but we should never brood over the contents of the taunt, but focus on the character and quality we can inculcate within us with each passing day”.

MUNEER has a great intellect for his talent as he explained us things in an alluring manner. He said, “Punching and kicking are not enough, you need to understand many truth’s about martial arts also sports martial arts and traditional self defense martial arts are two different categories”. With his underway practice He is a practitioner of TRADITIONAL KARATE , MMA, BOXING, JEET KUN DO and many other arts .

Following his unending passion he never let things to back him off and his success was evident as he has received many awards in every competition so far. Muneer being a conscientious boy also secured 2nd Position in a prominent National level Speech competition “KNOW YOUR COUNTRY”.

MUNEER while talking about his future goals told us, “I will try to be the part of empowering youth through Self defense, which is the need for every human being in the present scenario, so that it should be the first step towards self- independence for them”.

Muneer’s message for youth- “The best way to exhibit your skills is to be an active participant. Sometimes, your skill may not be highlighted at the first instance or get noticed instantly. You should continue your efforts because the more you do something, the better you become at it. Whether you get credit or not, you will definitely learn and grow through the process of participation and that is going to benefit you in the long run”.

nevs.asiahttp://www.nevsasia.com%20
One stop solution for Trending news, Crypto News , Entertainment News and the news based on your interest
Previous articleMIR ZUBAIR: Touching the skies with his Entrepreneur skills
Next articleOluwafemi John Paul /African, American, Singer.

Be the Most Romantic during Intercourse

What Causes Erectile Dysfunction and What Treatment Works Best

Relieving Chronic Lower Back Pain: A Guide for Sufferers 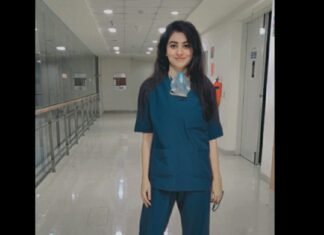 Massage Therapy: How Effective Is It To Relieve Pain?