She Reported Her Sexual Harasser To Instagram. It Banned Her Instead.

British influencer and illustrator Venus Libido was at home in Southampton recovering from a recent surgery when the notifications popped up on her phone. In private messages to her 128,000-follower Instagram account, a stranger had sent her two photos of his penis, along with the text “enjoy the view.”
It was the afternoon of Dec. 16 and Venus, who uses a pseudonym to protect her identity, closed the app in disgust. If she ignored him, she figured, he would probably go away. But moments later, another message appeared: “bitch i know you read it say something.”
As an outspoken feminist and mental health advocate, Venus decided to post screenshots of the man’s messages on her Instagram Story and page (censoring his genitals and username) to call attention to the kind of harassment women endure daily on the platform. She also blocked and reported him to Instagram. It wasn’t long before he contacted her from two newly created accounts to threaten and verbally abuse her.

So Venus reported him again. A short time later, Instagram — which rolled out a new anti-bullying initiative that same day — told her the man had not violated its user guidelines, and his account would remain intact. In fact, it was Venus who’d broken the rules, according to the next alert she received. Instagram removed her post without specifying which policy it had violated, an action the company would later claim was taken in error.

“That really angered me,” Venus recalled. She then posted a piece of her artwork on her page with a caption describing the situation and criticizing Instagram for declining to take action against her harasser. Minutes later, as comments were flooding in from other people describing their similar experiences on the app, Instagram shut down her account altogether.

Social media sites are shielded from liability for user-generated content, meaning they’re free to decide who and what is allowed on their platforms. By choosing to silence victims and protect abusers, Instagram is not only tolerating harassment — it’s encouraging it.
Venus’ case isn’t an isolated occurrence. In July, when accusations of sexual misconduct started to pour in against disgraced celebrity photographers Marcus Hyde and Timur Emek, a number of models used Instagram to speak out about their own alleged experiences with the two men.
Instagram reportedly disabled the account belonging to photographer and art director Haley Bowman after she used it to accuse Emek of assaulting her when she was a teenager. Upon regaining access to her page, Bowman said she felt as if she was “being punished for calling out a rapist,” according to Screen Shot Magazine.
Similarly, after model Sunnaya Nash posted screenshots purporting to show Hyde asking her for nude photos of herself in exchange for a free photo shoot, Instagram took down the posts and threatened to delete Nash’s account.
Instagram, which eventually removed Hyde and Emek’s accounts as the allegations continued to surface, later claimed that the deletion of Nash’s content “was a mistake obviously.”
Venus received a similar explanation from the company, but she doesn’t buy it.
“I felt like I was being silenced for calling out an issue Instagram wasn’t addressing,” she said of her own account’s closure. “I’ve built my account up over two years, and it felt like it was being ripped away from me for speaking out.”
Like many content creators, Venus uses Instagram as a digital portfolio where she promotes her work to a wide audience. Being kicked off the billion-user site threatened to jeopardize her livelihood, so she appealed the deletion through the app and contacted an Instagram representative directly.

After several anxious hours, Venus’ account was reinstated. Not long after she’d logged back in the next morning — her 28th birthday — her harasser sent her yet another photo of his penis with the message: “I hope that teached you a lesson getting your account removed!!” 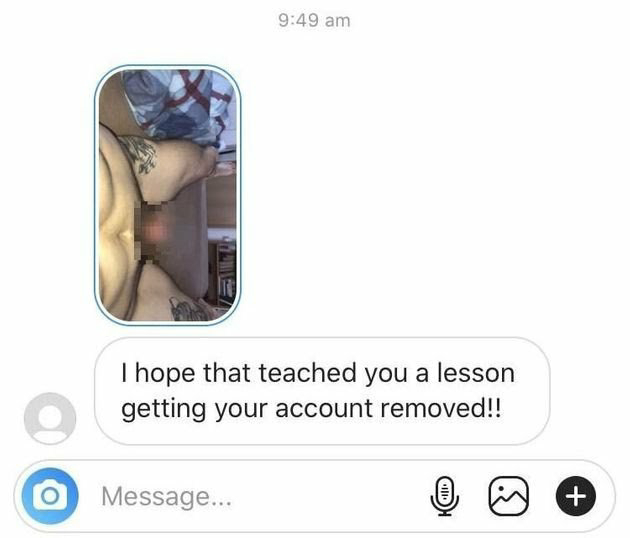 Venus blocked the man yet again, but that didn’t stop him from creating one new account after another to continue his campaign of abuse. Later in the day, he sent her a full-body nude and another stream of messages:
“ur boring”
“oh and a dumb slut”
“if i gave u my real instagram would you not expose me and just write me a message?”
After being contacted by HuffPost, a spokesperson for Facebook, which owns Instagram, said that it has taken action to ban the man from its platform, and that it had mistakenly removed Venus’ content and account.
“@venuslibido didn’t violate our policies and we apologize for the mistakes we made when reviewing content on her account,” the spokesperson said. “We have taken steps to stop the individual harassing @venuslibido from returning to Instagram.”
But Venus sees a pattern. Instagram is notorious for censoring, shadow banning and silencing women, she noted. And although the company claims her original post was removed in error, it still hasn’t been restored.
“How is it that Instagram cracks down so hard on things like female nipples, but they’ll continue to let a man send me photos of his genitals even after I’ve reported him over and over again?” Venus asked, referring to Instagram’s ban on posts that show women’s nipples.
Since the scare of having her account deleted, several people have suggested that Venus keep her head down and stay quiet to reduce the risk of being deplatformed again, she said. But she refuses to self-censor.

“I have a chance to use my voice and my platform for good,” she said. “I don’t care if I get removed again. I’ll just keep fighting it because this is wrong, and if I don’t say something, then what am I doing?”

Mohit Churiwalhttps://mohitchuriwal.com/
I've always had a knack for storytelling! Hi there, I'm Mohit Churiwal. I'm a copywriter and, a blogger. I Interview individuals who've achieved some sort of success in their field- Actively building a knowledge base for Millenials

What is EduYear? In the words of Co-Founder of Eduyear, Yuvraj Singh, describing Eduyear as just an educational website wouldn’t be enough. Eduyear is a...
Read more 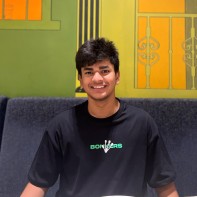 Mohit Churiwal
I've always had a knack for storytelling! Hi there, I'm Mohit Churiwal. I'm a copywriter and, a blogger. I Interview individuals who've achieved some sort of success in their field- Actively building a knowledge base for Millenials

Mohit Churiwal - 8 July 2020 0
It is commonly said that a picture is worth 1,000 words. Instagram is a highly visual social media channel, and therefore is in many...

How to Get Verified On Upmanch – The Essential Steps

Amit Saini, A 21 year old boy from Rai Bareli who started earning from a very young age through Instagram.

It is commonly said that a picture is worth 1,000 words. Instagram is a highly visual social media channel, and therefore is in many...
Read more

Shivam Pandey, a normal guy just like us but his courage to drop out CA as profession and work towards his dream unconventionally &...
Read more

How to Get Verified On Upmanch – The Essential Steps

If you want to know how to get verified on upmanch, you’ve come to the right place. In this guide we’ll tell you how...
Read more

Aman Jaswal, a great memer and an experienced Instagram admin, know about him!

Being an admin and a memer are two completely different things which most of the people don't understand or have not much knowledge about....
Read more

Debanshu Das, the introvert who is killing at Social media

Today we are talking about Debanshu Das, a 20-year engineering dropout guy who is spreading positive energy among lakhs of people with his stories,...
Read more